Erythropoietic protoporphyria is a rare inherited condition that usually first becomes apparent in early childhood. A deficiency in the enzyme ferrochelatase causes a build-up of protoporphyrin in the skin, leading to extreme photosensitivity. 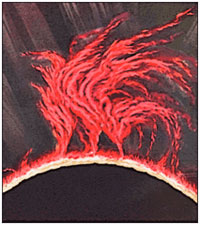 Exposure to the sun – and some types of artificial light – causes an uncomfortable or painful burning sensation and the skin may become red, swollen and blistered. There is no cure for the disease and, with sun barriers and creams offering little protection against the wavelengths that cause photosensitivity, sufferers are generally advised to avoid sunlight and wear closely woven clothing to minimise exposure. A new treatment may, however, be on the way as Clinuvel has recently announced positive interim results of a phase III trial of its photoprotective drug, afamelanotide which stimulates the body’s production of melanin.

Afamelanotide is administered beneath the skin as a biodegradable implant approximately the size of a grain of rice. The interim results are based on 12 month data for 14 Swiss patients and showed that the maximum severity of phototoxic reactions for patients on the drug was significantly reduced compared with those in the placebo group. Full results for the full cohort of 101 European and Australian patients are expected in the fourth quarter of 2009. The Swiss test was carried out at a high altitude where ultraviolet irradiation is more intense and the drug provided benefit in the spring and summer months, when symptoms of the disease are normally most severe. Increased pigmentation of the skin appeared a few days after administration of afamelanotide and lasted for up to two months. Exceptionally, at the end of the study, all 14 participants requested continuation of the drug for photoprotection for the next 12 months. Afamelanotide potentially offers people with erythropoietic protoporphyria an opportunity to lead more normal lives where they don’t have to avoid the sun or stay indoors.

Another group who may benefit from treatment are organ transplant recipients for whom daily exposure to ultraviolet irradiation poses an increased risk of skin cancers because of their life-long reliance on immune-suppressing drugs. Clinuvel hopes to file for initial approval in Europe in the next 18 months.