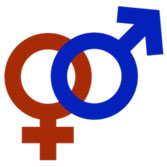 There are many subtle differences in the ways that men and women see the world around them. Women tend to be better at recognizing emotional overtones in others and in language skills whereas men are generally better at solving spatial problems. A team at the University of Iowa has now shown a connection between an ability to mentally rotate objects and the structure of the parietal lobe, the region of the brain involved in spatial ability and mental rotation. Although it was already known that parietal lobes in women have thicker cortexes than those in men, this anatomical difference had not previously been linked to performance differences in mental rotation tests. The surface area of the parietal lobe in men is greater than in women and this appears to be directly linked to improved performance. Magnetic resonance imaging (MRI) showed an approximately 10 % difference between men and women in the overall surface area of the parietal lobe. In mental rotation tests involving 38 men and 38 women, the men averaged 66% correct answers whilst the women averaged 53% correct answers.

The study is published in full in the journal Brain and Cognition.

It is not yet known whether the differences are caused by nature or nurture, although a small study carried out by researchers at the University of Toronto has shown that action video gaming can improve women’s spatial ability. After 10 hr of training with an action video game, both men and women showed substantial improvements in both spatial attention and mental rotation, with women benefiting more than men.