Both bird and human flu have been in the news during December. Fresh outbreaks of bird flu have recently been reported in Hong Kong, Indonesia, Cambodia and India’s north eastern Assam state. India has also sealed off part of its border with Bangladesh amid fears that the outbreak of the H5N1 strain had spread to new areas.

Attempts to determine how the H5N1 strain is evolving are being hampered by an unwillingness to share samples of the virus that would allow genetic changes to be monitored and new vaccines developed. The main problem is that there is no mechanism to ensure that the (poorer) countries that supply the samples would benefit from the vaccines developed by pharmaceutical companies in other (mainly richer) countries.

Meanwhile, the Centers for Disease Control and Prevention (CDC) has notified physicians of limited data pointing to increased resistance of H1N1 strains to the leading flu drug, oseltamivir. The resistant viruses do not seem to be more virulent than susceptible ones and the CDC has said that vaccination should continue as the primary method for preventing flu. When H1N1 virus infection or exposure is suspected, the CDC is currently recommending treatment with zanamivir or a combination of oseltamivir and rimantadine rather than oseltamivir alone.

Better news was reported in the 22nd December issue of Chemistry and Industry. Researchers at the University of Melbourne and the biotech company, Immuron are developing cow antibodies for the treatment of flu. 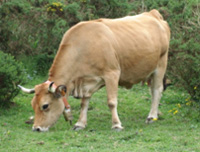 The antibodies are obtained from colostrum of cows that have been vaccinated with PR8 virus. The antibodies, which are formulated as a mouth spray, could boost protection offered by traditional vaccines, particularly in the very young or very old who are less well protected by conventional vaccines. The antibodies are claimed to have completely cleared the virulent strain, PR8, from mice, and the researchers say that the treatment could be available as an over-the-counter medicine in the next two years.