Phosphotidylserine is an anionic phospholipid that is normally present on the inner surface of cell membranes. In cells infected with a wide range of enveloped viruses, however, the phosphotidylserine becomes exposed on the outside of the cell membrane. The monoclonal antibody, bavituximab, binds to the exposed phospholipid and alerts the immune system to attack the virally infected cells. Bavituximab is currently undergoing clinical trials for the treatment of hepatitis C virus infection.

New animal studies now show that bavituximab is able to protect against a broader range of viruses. Guinea pigs were infected with Pichinide virus, which is similar to human Lassa fever virus. Whilst all the untreated animals died, half of those treated with bavituximab recovered. The surviving animals also had long-term immunity to further infection with the Pichinide virus. This is the first report of an effective treatment against advanced Lassa-like fever infections in animals. Bavituximab treatment also cured mice infected with cytomegalovirus, an opportunistic infection that causes disease in immunosuppressed individuals such as transplant and AIDS patients.

Other viruses that cause phospholipids to become externalised on infected cells include influenza virus, herpes simplex virus and members of the smallpox and rabies virus families as well as hepatitis C virus and HIV. 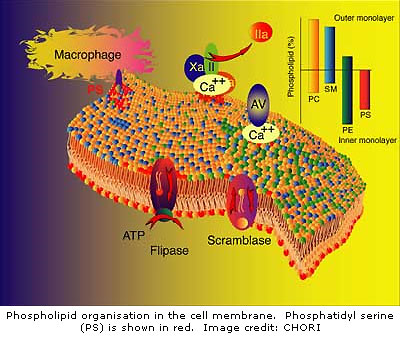 If externalisation of phospholipids is a general feature of cells infected with enveloped viruses, treatment with antibodies such as bavituximab may prove to be a broad-spectrum antiviral treatment. Since phosphatidylserine on virus-infected cells is host-derived, resistance may also be less likely to develop than against treatments that target components of the virus.

The study was carried out by scientists at the University of Texas Southwestern Medical Center and Peregrine Pharmaceuticals Inc. and is published in the Nov 23 online edition of the journal Nature Medicine.