Telomeres are structures which protect chromosomes during cell division and become progressively shorter as a result; telomerase adds telomere DNA to the ends of chromosomes and increases the potential for cell division. Most non-dividing cells show little or no telomerase activity but telomerase is up-regulated in cells that need to divide repeatedly, such as cells of the immune system. CD8+ T-cells play a crucial role in controlling HIV infection and, in CD8+ T-cells responding to viral antigens, telomerase is up-regulated. 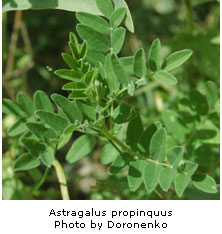 During chronic HIV-1 infection, however, CD8+ T-cells lose their ability to up-regulate telomerase, leading to critically short telomeres and reduced antiviral activity. A study jointly carried out by scientists at UCLA and the Geron Corporation has shown that TAT2, a small molecule telomerase activator isolated from the Astragalus root, can prevent or slow telomere shortening and increase antiviral efficacy. CD8+ T-cells from HIV-infected donors treated with TAT2 showed increased proliferation and enhanced ability to fight HIV.

The study is published in the Nov. 15 edition of the Journal of Immunology.

Although telomerase is up-regulated in cancer cells, TAT2 did not enhance telomerase production by tumour cells. Astragalus is also used in traditional Chinese medicine without obvious side effects suggesting that TAT2 will not promote the development of tumours.