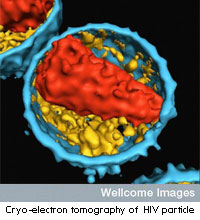 The human immunodeficiency virus (HIV) uses host cell surface receptors such as CD4, CCR5 and CXCR4 to gain entry into cells. Recently, monoclonal antibodies and small molecules that block these receptors have joined the armoury of drugs used to combat HIV infection. A new report in the journal Cell describes a genome-wide analysis to search for other virus-host interactions that are important for the early steps of HIV infection.

More than 40 host factors that regulate capsid uncoating and reverse transcription were identified along with 15 cellular factors that facilitate entry of the HIV preintegration complex into the cell nucleus and integration of proviral DNA.

Cytoskeletal proteins and microtubules were found to play roles in early HIV replication, and proteins involved in DNA-damage repair were found to influence the initiation of reverse transcription and the accumulation of HIV-1 DNA products prior to integration. Other cellular systems discovered to play roles in the early stages of HIV infection include nucleic acid binding proteins and the ubiquitin-proteasome pathway. Protein phosphorylation and dephosphorylation events were found to have a possible role in the regulation of HIV-1 reverse transcription, and prostaglandins were shown to have a potential role in HIV-1 nuclear import. Several cellular factors were also found to be important for HIV-1 DNA integration.

The study revealed totally new pathways in HIV infection, including involvement of Notch signalling in reverse transcription. A full understanding of the role of each of these host factors in cell types infected by HIV will be essential to assess their contribution to disease progression. However, given the success of compounds which block viral entry receptors, modulation of the activity of some of the newly discovered pathways could provide novel strategies for the treatment of HIV/AIDS.