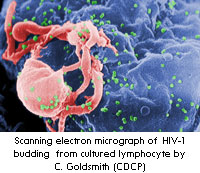 The term “Acquired Immunodeficiency Syndrome” or “AIDS” was first coined in 1982 to describe a newly recognised set of unexplained symptoms that occurred most frequently in gay men. In 1984, the cause of this disease was found to be a virus, now universally known as the human immunodeficiency virus, HIV. It is estimated that 25 million people have died as a result of AIDS and, that in 2007, around 33 million people were infected with the virus.

It had been thought that HIV transferred to humans in the 1930s, but a new study published in the journal Nature suggests that the virus crossed species much earlier. Comparison of the genetic differences between a sample of HIV obtained from human tissue in 1960 with an older sample obtained in 1959 suggests that a common ancestor had infected humans around 1900. The rise and growth of cities in west-central Africa in the late 19th and early 20th centuries may have been a contributing factor to the spread of the virus once it had crossed into the human population.