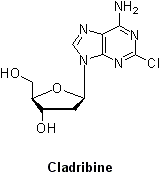 A drug currently being tested for its effectiveness in treating relapsing forms of MS is now to be tested to see whether it can prevent the disease from developing. The drug, cladribine, will be given orally to patients who have a first clinical event suggestive of MS. Patients will be treated for two years, or up to the time when they experience a second attack leading to a definite clinical diagnosis of MS. Treatment will be given in two or four cycles in the first year, with a single daily dose of cladribine tablets being given on four to five consecutive days in each cycle. This means that patients in the study will take cladribine for only 8 – 20 days in the first year. In the second year, two treatment cycles will be given to all patients.