Amyloid peptide oligomers are believed to contribute to the pathology of Alzheimer’s Disease and much effort has gone into developing inhibitors of the β- and γ-secretases which are key to production of these peptides. An alternative approach to reducing amyloid peptide levels would be to increase their degradation. A number of proteases, including neprilysin, insulin-degrading enzyme and plasmin have been shown to degrade amyloid peptides. 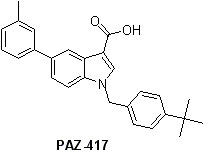 PAZ-417 is currently undergoing Phase I clinical studies to investigate safety, tolerability and pharmacokinetics in young and elderly volunteers.