Peroxisome proliferator-activated receptors (PPARs) are nuclear receptors that play essential roles in the regulation of cellular differentiation, development and metabolism. Since the introduction of the thiazolidinedione class of PPAR-γ activators in the late 1990s to treat type 2 diabetes, the use of PPAR-γ ligands to treat other conditions, including cancer, has been investigated. Researchers at the Mayo Clinic discovered that human anaplastic thyroid tumour cells treated with the PPAR-γ activator, RS5444, express a protein known as p21 that inhibits cell replication and suppresses tumour growth, but the underlying mechanism was not understood.

The group has now shown that activation of PPAR-γ with RS5444 (also known as CS-7017) turns on the RhoB tumor suppressor gene, which in turn induces p21 expression, thereby shutting down the cell cycle and blocking tumour growth. The researchers say that it is unusual for a cancer drug to be able to cause re-expression of a suppressed gene in this way, and hope that other cancers in which RhoB is deactivated, such as head and neck, brain, and lung cancers, might respond to RS5444 or to similar drugs. RS5444 is undergoing phase I/II clinical trials (in combination with paclitaxel) in patients with anaplastic thyroid cancer and phase II trials (in combination with carboplatin/paclitaxel) in patients with metastatic non-small cell lung cancer.

A new study describes a high affinity interaction between siramesine and phosphatidic acid, a component of cell membranes that also acts as a signalling molecule. Siramesine is a sigma receptor agonist, selective for the σ2 subtype, which was originally under development for the treatment of anxiety but failed to show efficacy in clinical trials.

Siramesine was subsequently shown to kill cancer cells by destabilising their lysosomes. Vincristine, a microtubule destabilising antimitotic drug, which is used in various chemotherapy regimens, greatly sensitised cancer cells to the cytotoxic effects of siramesine.

The new study suggests that it may be possible to design small molecules to specifically scavenge phospholipids involved in the signalling cascades controlling cell survival. 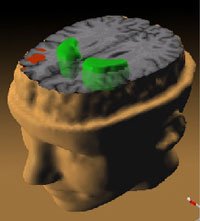