Share
Twitter0
LinkedIn0
Regular use of NSAIDS has been linked to reduced incidence of certain types of cancer but the underlying protective mechanisms are unclear. Some of the anticancer effects are believed to be mediated through inhibition of COX-2, but a study led by investigators at Sanford-Burnham Medical Research Institute has now identified another mechanism by which the sulindac sulfide (the NSAID metabolite of sulindac) inhibits tumour growth. The team found that sulindac sulfide induces apoptosis by binding to retinoid X receptor-α (RXRα), a member of the nuclear hormone receptor family which had been already been identified as a potential target for cancer therapy. In cancer cells, levels of RXRα are often reduced, at least in part because of proteolytic processing to a truncated form, tRXRα. As with other nuclear receptors, RXRα regulates transcription of target genes by binding to DNA response elements but accumulating evidence suggests that RXRα may also have extranuclear activity. Both RXRα and tRXRα can exist in the cytoplasm and the study showed that cytoplasmic tRXRα can activate the PI3K/AKT survival pathway by interaction with the p85a subunit of PI3K, leading to anchorage-independent cell growth in vitro, and tumour growth in animals. Sulindac sulfide was found to inhibit the tRXRα-mediated PI3K/AKT activation, suggesting that the compound could provide a useful lead for anti-cancer drugs targeting this pathway.

The use of NSAIDs to reduce the incidence of cancer has been limited by the risk of major cardiovascular events and the Sanford-Burnham have identified an analogue of sulindac sulfide, K-80003 which has improved affinity for RXRα but lacks significant COX-2 inhibitory activity. K-80003 inhibited the growth of cancer cells in vitro and in animals and would be expected to have reduced COX-2-associated side effects. 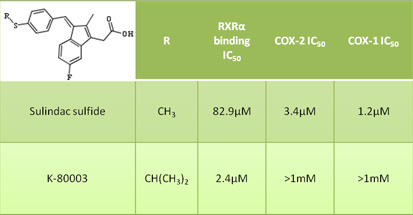 The study is published in the journal Cancer Cell.