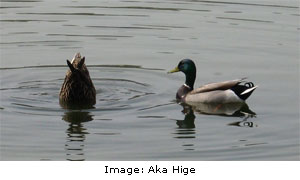 Compounds acting at G-protein coupled receptors (GPCRs) form the largest class of drug molecules but, although the biochemical steps involved in GPCR signalling are known in some detail, the location of these events in space and time in living cells is still poorly understood. Scientists at Novartis reported earlier this year that S1P1 receptors bound to the ligand FTY720 continue to signal after internalisation, albeit by a different pathway from that used when the receptors are at the cell surface. Writing in the journal PLOS Biology, scientists in Italy and Germany have now reported that the thyroid-stimulating hormone (TSH) receptor continues signalling via cAMP even after internalisation. Ligand signalling through GPCRs was traditionally thought to take place exclusively at the cell membrane and involve coupling of receptors to G-proteins, activation of G-proteins and subsequent signalling via second messengers such as cAMP. Receptor internalisation was believed to contribute to signal termination by reducing the number of receptors present at the cell surface – although endocytosis was later shown to be important for receptor resensitisation. Once inside the cell, GPCRs were believed to stop signalling to second messengers, but the new study shows that the TSH receptor continues to stimulate cAMP production after internalisation.

The team isolated native, 3-D thyroid follicles from transgenic mice with ubiquitous expression of an inert fluorescent sensor for cAMP, and showed that, although the TSH receptors were rapidly internalised after ligand binding, they continued to stimulate cAMP production from inside the cells. The cAMP signalling by the internalised receptors appeared, however, to be somewhat different from that occurring at the plasma membrane since it was sustained, rather than rapidly reversible, and led to a different pattern of downstream signals. Thyroid follicles were chosen for the experiment since they are a particularly good model in which to study the spatiotemporal dynamics of cAMP signalling – they maintain the supra-cellular organisation, size, and polarisation of thyroid cells in vivo, and are a rare example of cells that are under the strict control of a GPCR and cAMP for virtually all their functions.

The study shows that GPCR signalling in a physiological setting may be more complex than previously supposed, with the sub-cellular localisation of the GPCR playing an important role in the duration and spatial pattern of downstream signals. It will be very interesting to discover whether a majority of endogenous ligands – or drug molecules – continue to signal via internalised receptors and, if so, whether intracellular signalling is inherently different from that which occurs at the cell surface.

One thought on “Still Signalling from Below the Surface”