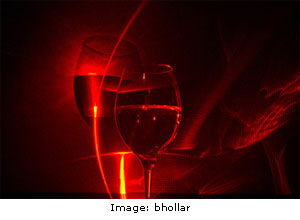 Since the early 1990s, when it was first suggested that the presence of the anti-oxidant, resveratrol, could explain the cardioprotective effects of red wine, the health benefits attributed to this compound have grown and grown. Based largely on studies in simple organisms and in rodents, resveratrol has been credited with cardioprotective and neuroprotective properties, as well as with anti-diabetic, anti-cancer, anti-inflammatory, and anti-ageing powers. Resveratrol has been shown to interact with numerous biochemical pathways: the anti-ageing properties of resveratrol have been linked to activation of sirtuins, and researchers at the University of Glasgow and the University of Singapore have now identified a pathway involved in its anti-inflammatory effects.

Pretreatment of human or mouse neutrophils with resveratrol was found to significantly block oxidative burst, leukocyte migration, degranulation, and inflammatory cytokine production caused by the inflammatory mediator, C5 anaphylatoxin. The anti-inflammatory activity of resveratrol was attributed to its ability to inhibit sphingosine kinase (IC50 ~20µM) and so prevent activation of phospholipase D. Resveratrol also blocked ERK1/2 phosphorylation independently of sphingosine kinase. In further studies, prior injection of resveratrol reduced the inflammatory response of mice to challenge with C5 anaphylatoxin. The authors suggest that inhibition of sphingosine kinase by resveratrol could provide an effective treatment for systemic sepsis, appendicitis, and peritonitis, which are currently very difficult to treat. The study is published in the August print issue of FASEB Journal.

Given the profusion of biochemical targets that are being uncovered for resveratrol, it will be very interesting to see whether analogues that are being optimised specifically for one pathway retain the full activity of the parent compound in selected animal studies.