Green fluorescent protein (GFP), originally isolated from the jellyfish, Aequorea victoria, fluoresces green when exposed to blue light. Because the protein is easily detected, its gene has become widely used as a reporter gene in biological experiments. The gene is fused with the gene for the protein of interest and, when this gene is switched on, GFP is also produced by the cell and production of the target protein can be monitored by measuring the green fluorescence. 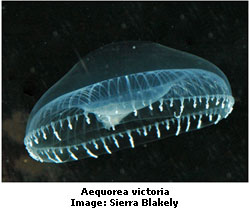 Although the protein has proved so useful to biologists, the natural function of GFP is not well understood. Writing in the journal Nature Chemical Biology, scientists from the Shemiakin-Ovchinnikov Institute have now shown that, when exposed to light, GFP can act as an electron donor. It was already known that under low (<1%) oxygen conditions, GFP undergoes a photoconversion into a red fluorescent state, a phenomenon the authors call ‘redding’. Although the GFP red state is stable for many hours in the absence of oxygen, its structure and mechanism of formation were not understood. The authors found that redding could also be brought about by treatment with electron acceptors under both aerobic and anaerobic conditions. In the presence of electron acceptors such as nicotinamide adenine dinucleotide (NAD) or cytochrome c, the green glow reddened – the same effect as seen under low-oxygen conditions –suggesting that transfer of electrons could be changing the structure of the chromophore. The authors were also able to demonstrate redding in living cells, although there was a high variability of redding rate between individual cells within a number of different cell lines. Rather than just passive light absorbers/emitters, the study points to a new role for GFPs in light-induced electron transfer – a role that should be kept in mind when designing experiments using these proteins.