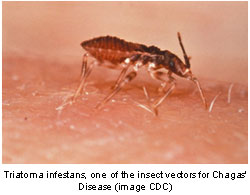 Chagas’ disease is a parasitic disease caused by the protozoan Trypanosoma cruzi that affects an estimated 16-18 million people in Central and South America. Transmission of T. cruzi is most commonly by insect vectors but the disease may also be spread through blood transfusion and organ transplantation, through contaminated food, and from mother to child. In the first weeks or months after infection, symptoms are generally mild and the disease is often not diagnosed or treated. Over the course of years, however, chronic infection can damage the nervous system, heart and digestive system, leading to death. Only two drugs, with limited efficacy and significant toxicity, are currently available to treat the acute phase of the infection and none is available for treatment of the chronic phase of the disease. A report in the journal PLoS Neglected Tropical Diseases now describes three classes of heteroaromatic compounds which effectively inhibit replication of the parasite in vitro and show low toxicity towards host cells.

One of the compounds, CX1, showed strong tryptanocidal activity, which may be especially relevant for the development of drugs which are active during the chronic stage of the disease when the parasites are intracellular and not actively replicating. The compounds also showed high activity against Leishmania major and Leishmania amazonensi which cause leishmaniasis.