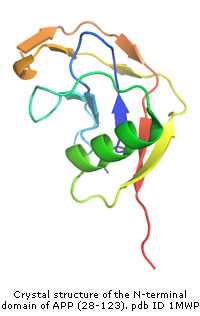 Cleavage of amyloid precursor protein (APP) by β- and γ-secretases into neurotoxic β-amyloid peptides is believed to play a leading role in the development of Alzheimer’s disease, although clinical proof of this hypothesis remains elusive. Researchers at Genentech and the Salk Institute have now discovered a new pathway by which APP could contribute to the development of Alzheimer’s disease. The researchers propose that interaction of an N-terminal extracellular domain of APP (N-APP) with death receptor 6 (DR6) triggers widespread caspase-mediated neuronal destruction and axonal pruning. DR6 is expressed by developing neurons and, together with APP, plays a key role in remodelling the embryonic brain during development by triggering apoptosis in neurons and pruning axons that fail to make productive connections. Axonal pruning was found to require caspase 6 whereas cell body apoptosis requires caspase 3.

Although the team has yet to demonstrate that N-APP causes Alzheimer’s disease and the mechanism underlying reactivation of the pruning process in adults is, as yet, unknown, the discovery identifies several new potential targets for the treatment of Alzheimer’s disease. The study does not rule out a role for β-amyloid peptides in the pathogenesis of Alzheimer’s disease but suggests that blocking the action of N-APP on DR6, either directly or via downstream pathways, may also provide benefit.

The study is published in the February 19th advanced online issue of the journal Nature.