Seasonal epidemics of the influenza virus continue to kill hundreds of thousands of people annually, and the increasing incidence of resistance to approved drugs means that there is a pressing need for new therapies. The viral polymerase is an attractive target for drug development and a newly reported high-resolution crystal structure of the polymerase PA domain should provide useful insights for inhibitor design. 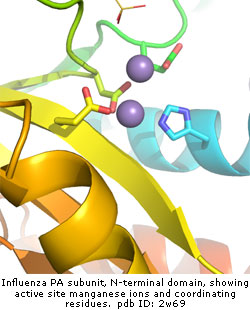 In eukaryotic cells, mRNA must be capped at the 5’-end for efficient translation. Cap structures, consisting of N7-methylated guanine units, also assist in transport of mRNA from nucleus to cytoplasm and protect mRNA from degradation by 5′ exonucleases. The viral polymerase ‘steals’ caps from cellular mRNA in a process known as ‘cap-snatching’ and attaches them to viral mRNAs so that these can be translated into new viral proteins.

The polymerase is a heterotrimer comprising three subunits, PA, PB1 and PB2, and whilst previous studies had shown that PB2 plays a role in cap-binding, PB1 was believed to be responsible for ‘cap-snatching’. The new study, published online on February 4th in the journal Nature, clearly shows, however, that the PA subunit contains the endonuclease active site and plays a crucial role in cleaving the cap from host mRNA. The active site, which is conserved in all influenza viruses, contains a histidine residue together with a cluster of three acidic residues that bind two manganese ions in a configuration similar to that observed in other two-metal-dependent endonucleases. Inhibition of cap-cleavage by the endonuclease would be an effective anti-viral strategy since it would effectively block synthesis of viral proteins.