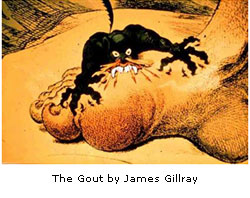 Gout is one of the most excruciating conditions known and is caused by the accumulation of sodium urate crystals in the joints, leading to inflammation and severe pain. It usually affects the big toe, but can develop in any joint in the body. Risk factors for developing gout such as drinking alcohol, being overweight and eating a diet rich in red meat, offal and shellfish have led to the popular image of gout as a disease of the rich and privileged. Over the last 30 years, however, cases of gout in the UK have more than doubled, possibly due to increased levels of obesity and increased consumption of sugary drinks containing fructose which inhibits the excretion of uric acid. It is estimated that about 1.4% of men and 0.6% of women have gout.

For over 40 years, allopurinol has been used to reduce blood levels of uric acid and so prevent attacks of gout. Many gout patients, however, have impaired kidney function and are unable to take large enough doses of allopurinol to be fully effective. Now an FDA advisory committee have unanimously voted in favour of Takeda’s application for uloric, a new drug that also reduces levels of uric acid in the blood. Unlike allopurinol, uloric is not significantly excreted by the kidneys and so should provide relief for gout sufferers with impaired renal function.